This continues the letter dated Sunday 18th April 1965 which began:

On Friday we received the news that we are to be in New Jersey next week, so we drove down to New York and spent the weekend here.

We spent Saturday afternoon visiting one or two friends in Brooklyn, and we took Bob to visit ‘Big J—‘ our gangster friend, and he was in great form. He immediately laid on an Italian style tea party for us, and we forced ourselves to eat some awful Italian food.

In the evening we went out to a very world-famous restaurant called ‘Mamma Leone’s‘ in New York. It is a place where all the famous eat and it specialises in Italian food. We went at Bob’s insistence as he is of Italian parents, and he was able to explain the menu to us.

The place is famous for the amounts of food you get, and although it’s quite expensive it’s very true. You get far too much of everything and couldn’t possibly eat it all. It was a great meal and one to remember (if only for the bill)!! 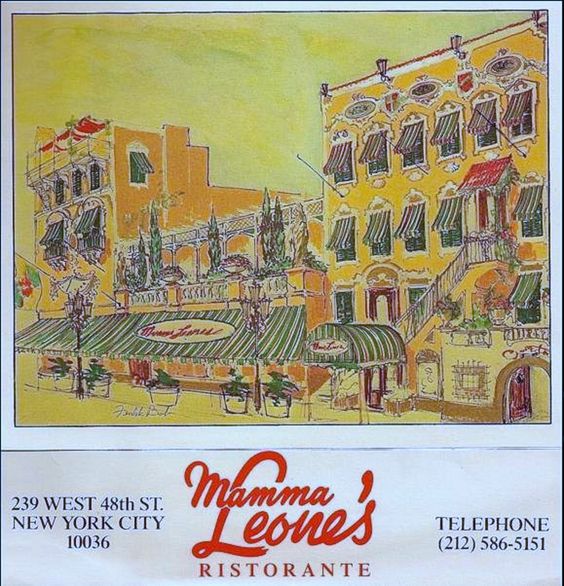 When we came out we found great excitement on Broadway. The famous ‘Latin Quarter’ had been gutted by fire, and they were still fighting the fire. All the people who had been dining there were out on the pavement, as were the shivering show girls who were still in their costumes. It looked quite serious and will probably be closed for some time.

We drove around for a while and saw a few of the inevitable fights, in spite of the extra 1,150 police (at the cost of 346 million dollars per year) which have been especially recruited to protect visitors to the World Fair – 800 of them are on the subways, and each have a dog!

So, we decided to go home to the motel and watch a few films – which we did.

Today we got up an hour late because we forgot to put the clocks forward an hour. This was a pity as we went to the World Fair today, however we were there by 11 o’clock and went in. Quite frankly I was quite disappointed, because after all the ballyhoo I was expecting something better.

Colin thought it was great, but I didn’t think much of it. Some of the exhibits were very good and very futuristic, and some of the buildings are very modern and unusual, but the majority of it is very expensive, very brash and very much a racket. Still it is good to be able to say I went to the World’s Fair in New York in 1965.

Colin hates New York and always feels a bit uneasy when we come here – but Bob is amazing. He has an ulcer (at 23) and he is so nervous when in New York that his ulcer always ‘plays up’ and last night he was in a terrible state. Driving into Manhattan he was pale and perspiring heavily – and he’s a big strong fellow. It’s amazing how some people dread New York.

Oh, by the way, at the Fair there was an English pub selling Watneys Red Barrel beer, so we had some of that – and very nice too!

I had a letter from Carol the other day and was surprised to hear that she didn’t appreciate my taste in jewellery. However I’m glad she got it safely.

Colin has had the latest news about his mother. She has a slipped disc, I think, and has to stay in bed for six weeks on a plaster board, so it must be fairly serious. If you are not too busy maybe you could pop in and see her sometime.

I don’t know if it will make any difference to their proposed visit to this country or not. I hope not for this their sake’s (or Colin’s either).

Join us at www.facebook.com/Tones1960stravels to say hello, find out more or ask Tony a question 🙂

Note: Mama Leone’s was definitely quite legendary in New York, especially in the 60s. According to the article linked above,

By 1987, they were so well known, the restaurant were printing and giving away 25,000 Mamma Leone’s Ristorante menus every two months! They claimed to be the biggest restaurant in New York City – and with good reason.

It was a world-famous Italian opera singer, Enrico Caruso, who persuaded Luisa Leone to open Mama’s in her family living room in 1906.

She set up 20 chairs for diners – but on her opening night, Carusio brought so many friends to dine that many ended up sitting on wine cases to eat.

Superstar actress Elizabeth Taylor was once barred from a dining room for wearing slacks, while president Harry S Truman taught the chef how to cook his favourite steaks.

Mama Leone’s closed in 1994. All that remains are rare copies of her cookbook, Leone’s Italian Cookbook, which are now collector’s items (I’ve just seen one online for £335.92!)

Thanks to THIS ARTICLE, here’s Mama Leone’s recipe for eggs with zucchini!