Well, I’m afraid once again all I told you in my last letter has changed. We were under the impression that we were going back to New York City, but in actual fact we are going to Rochester, New York State, which is quite a different kettle of fish, as this is on the south coast of Lake Ontario, and quite near to Niagara Falls and Canada.

So we are quite pleased as we shall be able to go into Canada again. Actually we are in Canada at the moment (in London, Ontario – of which I have just sent you a card, which will probably take weeks). 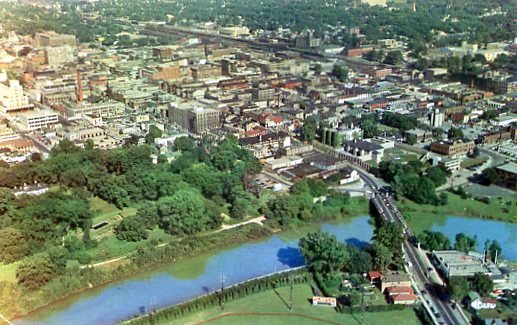 Postcard reads:  Dear family, Back in Canada once more on our way to Rochester, New York. Very cold but very nice. This is London which has lots of names from our London and even the River is called the Thames. Love from Tone. Please keep the card.

We were advised to go to Rochester via Canada by the office as they wanted us to bypass Pennsylvania. This is because our car is registered in Pennsylvania, and the licence tags (plates) have expired (a month ago) and they have sent them in the post to Rochester. We are safe in any state outside Pennsylvania, but the moment we enter it we risk being nabbed, so hence our detour through Canada.

We had a good look around London earlier this evening and things are far more expensive. Petrol is nearly twice as much, and clothes are very expensive.

As we crossed into Canada at Detroit it was 5pm and we saw lots of the automobile workers coming out and heading for home. Detroit is where nearly all American cars are made. We noticed lots of the workers lived in Canada, and are Canadians.

We were puzzled to know what the tax arrangements were for these people, and our motel manager has just told us that if Canadians work in the USA, they have to pay income tax to BOTH countries. The American wages are big enough to enable them to do this, and still be better off, which is quite surprising.

Today we drove up from Indiana, all through Indiana and Ohio, two of the worst hit states of Sunday’s tornadoes. We were amazed and horrified at what we saw. The death toll at the moment stands at 247 and we could see why.

In places complete villages had been swept away.

We saw houses reduced to piles of wood and rubble. We saw farms where there was nothing left other than bales of straw. We saw churches demolished, and trees, some hundreds of years old and feet thick, lifted out of the ground, roots and all.

In many places armed guards from the Army were there to prevent looting.

On the highway we learnt the story of a lump of twisted metal which lay at the side of the road. This almost unbelievably had been a car. It had been hit by the eye of the ‘twister’ (the black column of wind and debris that travels about the speed of an express train).

The car and its four occupants was lifted 70 feet in the air and then dropped. All four in the car were killed. In the same area a whole train of 57 trucks was lifted off the tracks.

A road which had just been laid was rolled up endways like a giant roll of lino. Some unidentifiable objects were carried as far as 70 miles.

It was the worst tornado in history to hit Indiana, and we had travelled from Chicago (badly hit after we left) and then drove all through the state, calmly commenting on how windy it was, and how pretty the lightning was!!

People we have told have been horrified and said “But didn’t you hear the tornado warnings on the radio?” But the fact is we haven’t got a radio in this car. Quite honestly we took the whole thing very lightly until we read the reports, and saw for ourselves, today, the force these things have.

We passed through Toledo this afternoon, and had to drive past one of the worst hit areas in the country. A whole street has gone, and all the trees and vegetation with it.

We heard (from a waitress) of a local farmer who was in a field when he saw the tornado bearing down on his farmhouse. He watched as it lifted the whole house high in the air, taking his wife and four children with it. All were killed.

We are going to ask the company for a radio to be fitted in order that we may hear any future warnings, and get out of the area. Normally 200 people on average die because of tornadoes in a year. However, as I have told you, 247 people died in one night which is fantastic.

We have had some personal requests from customers where we have been working in Cincinnati for us to go back to them should any more work arise in that area – which is very nice. Also we have had a few more complementary letters written in. So who knows we may then get a rise, you never know!!

This firm seems to have more money than sense. They haven’t questioned anything we have spent yet. We only stay at the top places and they don’t seem to mind at all. ‘Hi’, the fellow we have been working with, told us that they spent $750 on him (on fares and accommodation) before they hired him. He was amazed and he’s American!!!

Join us at www.facebook.com/Tones1960stravels to say hello, find out more or ask Tony a question 🙂

You can read Tony’s modern day comments on the tornadoes on his LETTER dated 11 April 1965.

He has never forgotten the horrors they saw after the storms – and how lucky they were to escape unscathed.

The photographer Paul Huffman, who took the image of the double tornado, and his wife Betty describe their experiences that day in THIS INTERVIEW.

There are also survivors stories and photographs collected on THIS BLOG which includes a mixture of tragic stories and miraculous escapes.

2 thoughts on “13 April : Back in Canada and the horror of the Palm Sunday Tornadoes : London, Ontario, Canada”