This continues the letter dated Monday 25th Jan which began:

We have been working all this week in a warehouse in Brooklyn, and there are three women in the warehouse who can be made to laugh very easily, and we have had quite a bit of fun.

Two of them are the wives of the owners, and tonight we went ten-pin bowling with them. I don’t like this very much but nevertheless it was a pleasant night out.

We have been an hour late for work every day this week due to the fact that we get lost each time!! Although the roads here are terrific, the method of road signs are terrible and it’s very easy to go wrong especially at these fantastic intersections. So we spent an awful lot of time going the wrong way!! Another problem is that, sometimes, once you get on the Expressway you can’t get off. It’s all very confusing.

We have a lovely car. It’s very big and fully automatic and in heavy traffic is very easy and comfortable to drive. The standard of driving here is terrible – and you have to be prepared for anything. One of the reasons is that there are so many more women drivers. Nearly every woman has a car.

Last Saturday on TV there was a Saturday afternoon sports programme and one item was the ‘World Demolition Derby‘. This apparently is a popular sport here.

It takes place in a huge stadium, and about 50 cars are formed in a huge circle. On a signal they all start, and the idea is to demolish the other cars. The winner is the last car to be able to move.

The scene was amazing, cars turned over, cars caught fire and were smashed beyond recognition. They could be disqualified for not being ‘aggressive’ enough. You can imagine what it was like.

At the end, huge bulldozers came in to clear the field for the next round. To save their radiators most of the cars went backwards – crazy!!!

However I found this fantastic film about the history of Demolition Derby at New York’s iconic Islip Speedway, where this surreal motorsport purportly first began – at a time when second-hand cars had so little value for scrap or resale that they were regularly simply abandoned. From this world came the ‘sport’ of destroying your own car for fun…

It became enormously popular, with massive crowds gathering to watch large derbies. The film explains that in 1963, the ultimate winner of the derby would win a new car, plus $1,000 – a huge sum in those days.

Another film here shows a 1966 New York demolition derby with 200 cars smashing each other to pieces in front of a delighted crowd.

It’s an incredible sight, especially to those (like us Brits) who are unfamiliar with this tradition. But it’s awful to see so many stunning vintage cars wrecked! 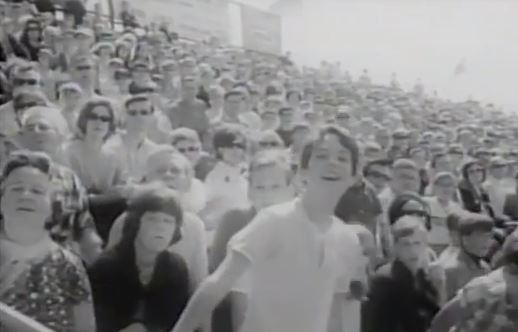 Tony is 81 and lives with his wife in South West England. Aged 26-29, he travelled the world with his friend Colin, cataloguing their adventures in his letters home - and he's now revisiting those memories, 53 years later. Jackie is Tony's wife, who's dictating the letters using voice recognition software. Jackie has now been nicknamed 'The Dictator.' A very happy pair, in recent years they have enjoyed visits to the Arctic Circle, Australia, Vietnam and Cambodia, and they are now happily planning their next adventures abroad. They have two daughters, Juliet and Tiffany. A features journalist who loves tales of true life adventure, Tiffany has set up this blog to share her father's letters and photos. Tiffany, Juliet, Tony and The Dictator welcome you to Tone's 1960s Travels! View all posts by Tone's 1960s Travels