Tonight, to my delight, my parents dropped off all of Dad’s travel photos and slides. It’s a huge, exciting job to scan them all. I’m already loving it 🙂 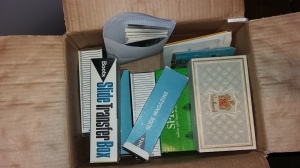 I’ve also decided to make a change to how we operate.

The next letters will start appearing in December – following on from Dad’s last letter, which took us to the 12th December 1964.

So from now on, I’ll be uploading the letters in ‘real time’ – ie on the date when Dad wrote them. They’ll just be arriving online 53 years later…

I hope you approve! So your first post from the past will be delivered in about two weeks – this time fully illustrated.

Until then, I’ll be working through the letters which are already on the blog, adding Dad’s photos. Watch this space and thanks for your patience!

(more follows – below image of Colin)

Finally, a teaser written by Dad, about their misadventures in 1966 New Zealand…

We arrived for our job interview at the huge factory.

‘Can you both drive fork lift trucks?’ the boss asked.

‘Fantastic, we’re short staffed, can you start tomorrow at 8am?’

There was only one small hitch.

Neither of us had ever sat in a fork lift truck before, let alone driven one.

And the jobs were at the New Zealand Glass Works.

The next weeks would prove to be shattering for all involved…

A Hyster 3 wheeler – the machine I was handed the keys to, the next morning.